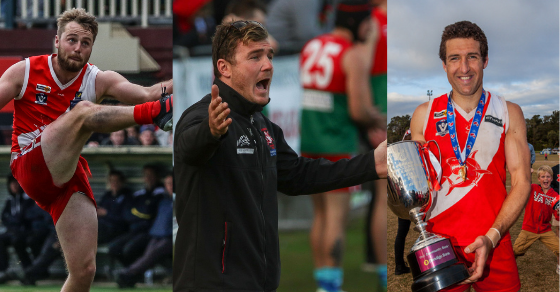 As the MPNFL sets it sights on a return post-lockdown, one of the biggest stories of the year has broken with the Sorrento Football Netball Club standing down their senior coach Luke Tapscott.

After a successful tenure with the Sharks which included making an immediate impact with the 2017 premiership team, Tapscott will be replaced by a coaching panel headed up by star forward Leigh Poholke.

The club has released the following statement:

Leigh Poholke (28) has been a lifelong Sorrento man and bleeds for the Sharks, just wanting to help the club anyway he can.

“I’ll do whatever I can, to do what’s best for the club,” Poholke says.

Currently out for an extended period with a serious broken arm, Poholke has had an impressive coaching resume through the junior ranks, and it will be fascinating to see how he leads to club moving forward.

Joined by the likes of Troy Schwarze, who led the Sharks to multiple premierships as playing coach throughout the 2010’s – they will look to have a strong run home in 2021. With applications for the head coach position in 2022 officially opened at seasons end.

Sorrento currently sit in 5th position on the Division 1 ladder, and will plan to resume their season with the new coaching outfit on the 19th of June in a huge clash against Dromana.

The club puts their full support behind Luke and his family and would love for him to continue to play, after a tough start to the season with multiple injuries.