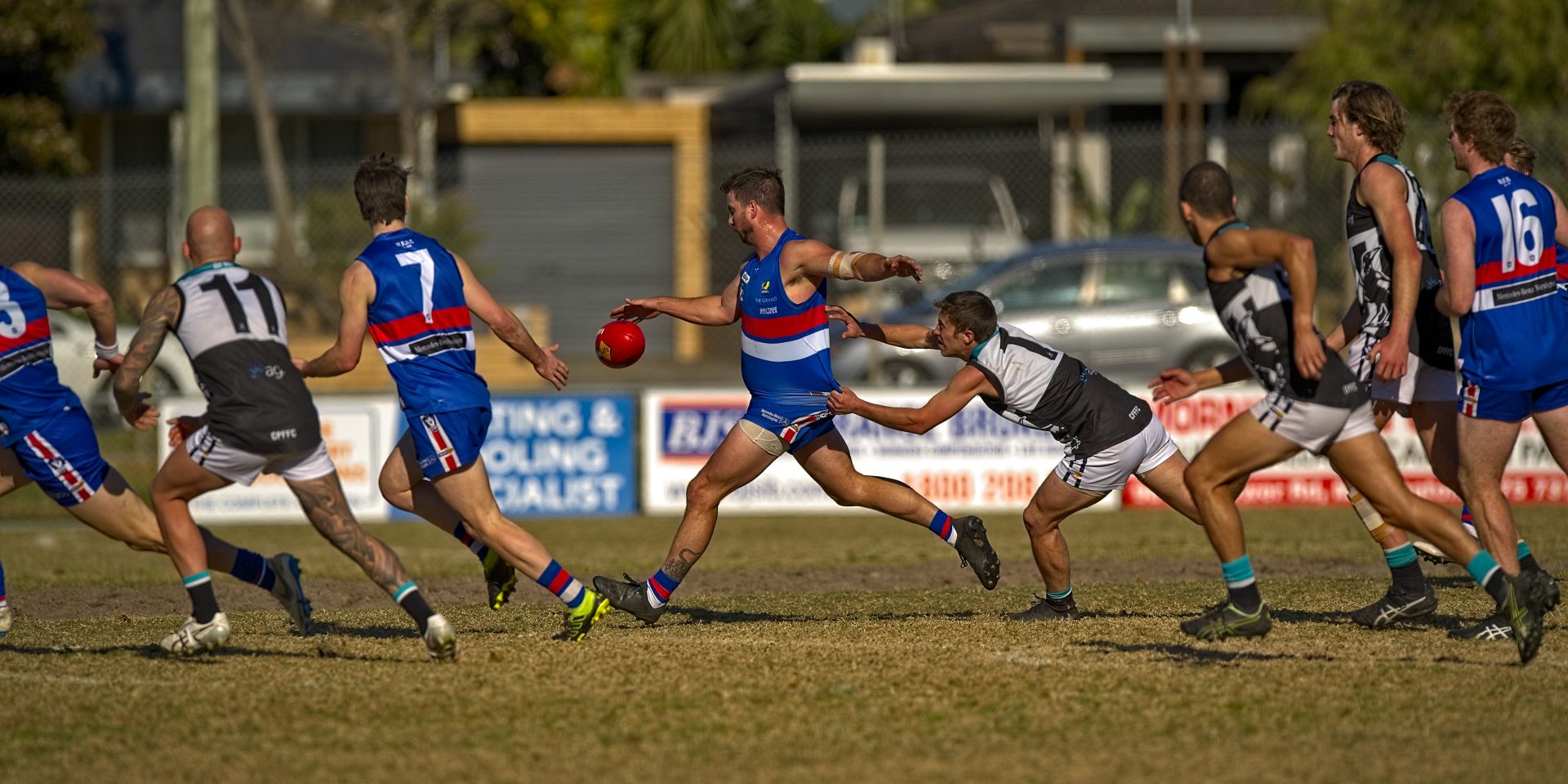 Frankston YCW were clinical in their 69 point victory over Rosebud. A hot and accurate start by the Stonecats saw them enter the first break with a 5 goal lead, while another outstanding defensive effort kept the Buds’ to just 8 points across the first half. Rosebud were able to score in the second half, but it would have felt as though it was alway a bridge too far to contemplate a true comeback. The result, YCW continuing as the only undefeated team in Division 1. First gamer Christian Tsiampas had an excellent start to his senior career, with an electric 4 goals, and Blake Mullane had 33 touches and 7 clearances, while Bailey Angwin was named best with 20 and 7 inside 50’s to his name. While for Rosebud, Blake Kupiers was named best, and Tom Stoffels fought hard.

Bonbeach got their first win this year without Trent Dennis-Lane, defeating Pines by 89 points. Both teams had a slower start to the match, with the margin only fifteen points to the Sharks, but from there Bonbeach slammed on 13 goals to 2 for the remainder of the match, with an even spread of scorers, 13 individuals kicking at least one. For Bonbeach, Mitch Gent was the pick for best on, with 2 goals and 28 touches, and went at 78%. While Brayden Chapple, Sam Gilbert and Shane McDonald all kicked 2. For Pines Guy Hendry was able to find the goals twice from 13 touches, and Jon Hughes was named best on.

Four goals to Michael Bussey weren’t enough for Edithvale-Aspendale as they fell to Red Hill by 21 points. It was a competitive, back and forth affair, where neither side were able to hold much ascendancy on the scoreboard. Red Hill went into the main break with a 10 point buffer, but the Eagles got the margin back to just 1 point, but were unable to get the win in what was a gallant performance, thanks to 4 goals for Torren Powell and 3 to Angus Patterson for Red Hill, and Jake Mold was named the Hillmen’s best. For the Eagles, Bussey and Steve Mannix were named in the best, and Nick Carlon received the most votes with another impressive defensive effort.

Mt Eliza won a low scoring affair against Dromana. Both teams found it difficult to score, with their respective defensive efforts causing headaches, and resulting in a 5 point quarter time margin. Dromana found more of the ball head into half time, and leveled up the scoring shots but were woefully inaccurate, sitting at 2 goals 7 and 10 points behind. The low scoring continued and with a 16 point lead 5 minutes into the last quarter, Dromana were unable to close the gap, and neither side scored in the last 20 minutes. Elliot Simmons was named best for the Redlegs with 23 touches and 4 rebound 50’s. While Shawn Watson and Bailey Breen kicked 2 goals each, all in the first half. While for Dromana many familiar faces in the best. Sam Geurts picked up the nomination with 37 disposals, and Billy Geurts and Billy Quigley was again impressive.

In the GameFace Match of the Day, the Frankston Bombers beat their David Macfarlane Reserve hoodoo with a win over Sorrento. After a tight first half, the Bombers started to move the ball freely and get on top in the middle of the ground which led to some quick scoreboard pressure. Welcoming back coach Beau Muston with 3 goals, the Bombers were also led by Alex Harnett who collected 22 possessions and kicked 4 amazing goals. Khan Haretuku kicked goals at important moments of the match and finished with 185 Premier Data Ranking Points. For Sorrento, Myles Pholke was immense and played his best game back at local level with 32 touches and 3 goals.

Mornington found themselves recording a big win over Crib Point. The Bulldogs held Crib Point Goalless in the first quarter, and kicked 5 goals in 15 minutes, including a first quarter goal in traffic to Perry Lewis-Smith. The margin slowly increased but the Magpies were able to put away 4 goals before half time. But after the long break Mornington found plenty of avenues to goal, with 14 goals after half time, with Jackson Calder stealing the show with a monster haul of 11 goals, his tenth coming 10 minutes into the last quarter with a goal from 40 metres out, his third in 10 minutes. Crib Point kicked two goals late but fell by 94 points. As mentioned, Calder was named best with 11 goals, and Perry Lewis-Smith was in the best with 23 and two goals. And for Crib Point, Brad Arnold was named best on with 16 touches and 2 goals, while Kevin Van Den Berghe kicked 3 goals himself. 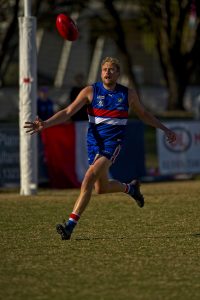 Chelsea ran out big winners to the tune of 119 points over Tyabb after a dominant second half performance. The Gulls led by a single goal heading into the first break, but piled on the pressure when play resumed, putting on 6 goals for the second quarter. And from there, with a handy 9 goals from Jack Francis, and 7 from Curtis Bywater, saw the gap balloon out, with Chelsea registering 25 goals for the match. Tyabb showed signs of improvement this week with 18 scoring shots themselves, but no player for the Yabbies registered multiple. Brad Harbinson was named best, and Daimen Plane was solid. Jack Francis was named best thanks to his haul, while Zane Carter featured and may be a smokey for the Division Two Best and Fairest.

Somerville proved too good for Devon Meadows with a 9 goal victory at home. It was a lighting start to the match with 6 goals in the first quarter and 11 for the first half seeing Devon Meadows on the back foot for much of the match. The Panthers struggled to return to the contest, Somerville dominating the hitouts thanks to Tom Roberts, and the Eagles importantly held their marks going forward, allowing for more controlled shots and contributed to the margin. For the Eagles, Lachie Williams was electric with three goals from 26 disposals and Zane Martin found 19 touches with 3 goals. Stefan Baumgartner was best on for Devon Meadows with a goal from 20 touches, while both Hillis brothers had 21 touches each, with Joel scoring 2 goals.

Seaford get another win in the books with a 41 point win over Karingal. Seaford fell behind early, being held to just 1 goal in the first half, but a respectable defensive effort by the Bulls held the Tigers back somewhat. And while the Bulls never found a way back on the scoreboard, they were able to hold the dangerous Tim Broomhead goalless. The Bulls were thoroughly beaten on the stats sheet but their pressure cannot be ignored, winning the tackle count and pressure acts. For the Bulls, Tom Curren was best on with 31 touches and a goal, in a dominant solo performance, and Jack Harmes was impressive. For Seaford, Matt Ravenall and Brodie Scully kicked 3 goals each, and Joel Fillipone was named best on.

Hastings survived a scare from Pearcedale, winning by 33 points, Hastings held a 32 point lead at half time, but the Dales’ came out hungry, setting up for a potential upset with a 3 point lead heading into the last quarter. Hastings however stamped down their authority and kept Pearcedale to just 1 point in a dominant display of defense. The Blues will rue their accuracy however, as they struggled to take their shots, with 24 behinds for the match. Nathan Gray continues to be one of Hastings best players, kicking a goal and dominating up the middle of the ground. While Luke Clark and Taylor Stratton kicked 3 each, while Corey Hanger kicked 5 for the Dales, and Luke Daniel 2, and Jake Frawley was named their best.

In the weekends only twilight match we saw Langwarrin extend Rye’s losing streak further with a 58 point win. The Roos’ dominated the first quarter from the outset, with Matt Naughton leading the hit outs early, but they were wasteful in front of goal with 2 goals 6 for the quarter. And it was this inaccuracy that kept the Demons in the fight, closing the gap to 13 points heading into the long break. Langwarrin were able to stamp their authority in the match with a 6 goal third quarter setting up the win. For Langwarrin, Jaiden Jakubenko was named best on with 17 touches and 12 spoils in a brilliant display, while Mark Baguley returned to his best with 3 goals from 17 touches. And Zach Andrewartha had 40 touches and kicked 2 goals himself. Ben Dickson was named best for Rye with 14 touches and 6 rebound 50’s, while Oscar Whitty had 23 himself.