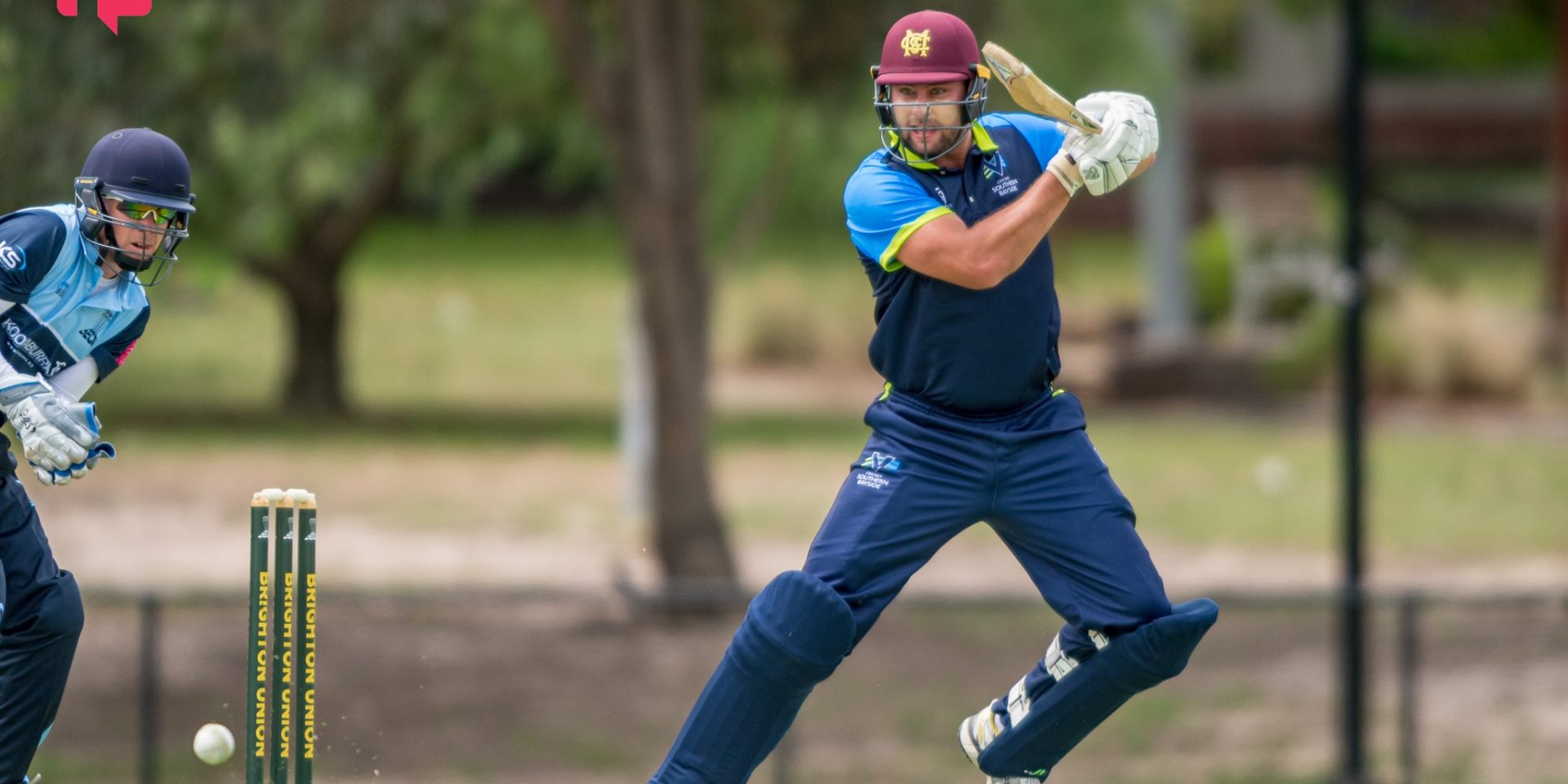 There was so much pressure on the Murrumbeena Cricket Club last season. They had been the best team throughout the home and away season in the previous two years in first division only to stumble in the finals.

The Monkey was well and truly on their back during 2019/2020 as they continued to dominate a rain affected year. They lost just two matches, both to Mentone, but won the one-day final over the same opposition and then proved too good for Mackinnon in the semi-final.

In the Grand Final, they took on the reigning Premiers Aspendale, so it was one team, the favourites who struggled to win finals, against the finals experts.

Murrumbeena batted first and compiled what seemed more than enough 6 for 332, with their prolific English import making 85, wicket keeper Xavier Ross making 96, and their star all rounder and captain Brad Kruger contributed for 67.

In reply Aspendale always seemed to be behind the game, but some dropped catches and the wagging of the tail, no doubt would have got the Murrumbeena players, coaches and fans worried that the final hoodoo was about to continue, but in the end, ‘Beena’ got the job done and won the title.

That means promotion to championship Division, where they had been a few years ago, but that stint in the top flight didn’t last long.

Brad Kruger, who will lead the team again hopes this time, their stay in the top grade is more permanent. “I think we lacked confidence the previous time in the championship, but I feel that having played pretty good cricket consistently since going back to first division, we have that self-belief to play like that in the championship,” He says firmly.

There is some bad news though for Murrumbeena on the player front, with prolific Englishman Matt Morris not returning due to COVID-19 and the restrictions.

“No doubt we will miss Matt, but every club is in the same boat in regard to not being able to recruit, attract or hang onto imports.”

They have picked up one key recruit though. “Manjula Guruge, who has represented the UAE, playing seven one-day and five T/20 internationals has joined us from Bayside, who played in first Division with us last year. He will certainly add more depth to our side particularly with the ball. We can’t wait to have him on board playing.”

“I think the main difference between the championship and first division competitions is there is more depth in the batting and bowling and we need to be able to compete with that.”

Kruger admits it will be interesting and challenging when the season gets underway, which is still scheduled at this stage for November 14th.

“We have not had the chance to have our normal pre-season, but all clubs are experiencing the same disadvantage, so everyone has basically had to embark on their own fitness regimes or programs.”

Kruger says with social distancing and heavy COVID-19 restrictions in place, it has been hard to stay in touch with most of his team mates. “Text messages has been the best way of doing that as the social aspect of the game at this level is pivotal.”

Kruger also knows that having a drink after a day’s play, which is an integral aspect of local cricket, could be problematic depending on social distancing.

“Obviously having a beer after the game is a big money earner for the clubs and it seems unlikely we will be allowed into packed social rooms, but hopeful with social distancing still likely to be in place, we can interact after a game or training in some capacity even outside, which many players tend to do in normal conditions anyway.”

There is also the issue with all competitions reverting to a one-day format of a likely shortage of white balls. That means red balls will have to be used.

Kruger admits that will be an interesting dynamic. “Does that mean if we use red balls in matches, we wear our whites as the red pill and coloured clothing used with the white ball clearly won’t work?” He asks with conviction.

His cricket journey is impressive. He was born in South Africa and then moved to England being good enough to get to the second XI of county side Northampton. “I then went to University and studied Sports Science, I also played some first class games in the University side against Northants, Yorkshire and Worcestershire. That was a great experience,” He remembers fondly.

What though was even better was being selected by the Netherlands to play in the 2011 World Cup, which was held in India, Sri Lanka and Bangladesh.

Kruger takes up the story how he was selected to play in cricket’s biggest international tournament. “During my time playing in the University side, the Assistant Dutch Coach knew of my involvement in that team and was also aware I had a Dutch passport as my grandparents were born there and gave me an opportunity to be selected for the world cup squad, which I was lucky enough to be.”

He played one game in the World Cup, but what an opponent, India at home. “That was surreal. It was fantastic to play against them.”

Kruger’s roles in this contest also involved two of the best of all time. “I caught Sachin Tendulkar, and was run out by Virat Kohli. The atmosphere was amazing. Those players are treated like gods over there.”

Kruger’s only regret in his World Cup experience was he didn’t play more. “I was meant to play the last two, but had some fitness issues unfortunately.”

Kruger claims cricket continues to increase in popularity in the Netherlands. “It’s obviously not as big as hockey, where the Dutch are very successful, but it’s growing, which is fantastic.”

“Many players who have played high level cricket have a Dutch connection and represented the country in one day internationals like Tom Cooper from South Australia, Victorian and Australian T/20 fast bowler Dirk Nannes, and probably their best ever cricketer, Ryan ten Doeschate. He was a fine county cricketer in England for many years.

“I learnt so much from that World cup experience and will cherish it forever,” He says proudly.

After that event, Kruger was looking for a change of scenery and opted to ply his trade in Australia and in Melbourne, coming here in 2011.

“The plan wasn’t to settle here permanently and my first year was on synthetic pitches, which I did not really enjoy. I then moved into the Southern Suburbs to live and joined Mackinnon, who were in the first Division with Murrumbeena last season, played on turf before going to Beena.”

“I knew when I arrived in Australia that playing the game at a high level, which I managed in England, had come to an end and I was comfortable with that.”

Once again, Paul Kelly will be coach of the Club. The former Clarence District cricketer in Tasmania, who played with ex-Australian test wicketkeeper, Roger Woolley and against a young Ricky Ponting, and in many ways according to Kruger, is the heart and soul of the club.

“Paul is fantastic. He is very passionate about the game and club. He relates really well to the boys and everyone respects him, which is crucial.”

Brad Kruger also loves Murrumbeena. “Having success is great, but I love the standard of cricket as it really tests and the social side, which of course is fantastic. The Murrumbeena boys are a great bunch of lads.”

Having watched Brad Kruger in matches last season, he is a match winner. With the bat he can turn a match in a matter of overs and he always gets important breakthroughs with the ball, so is he a true all rounder?

He smiles when answering this. “I am probably more of a bowling all rounder, but as the years go on probably enjoy batting more as it is less taxing on the body.”

In regard to this season in their return to the championship, Kruger says a good start is paramount. “We need to start well to build up some momentum considering as has been the case in recent seasons it’s a very even competition in the top grade.”

He adds, “We can’t wait to test ourselves against the best.”

In Brad Kruger, Murrumbeena certainly has one of the best, so no wonder why we can’t wait for the CSB season to get rolling. Bring it on!