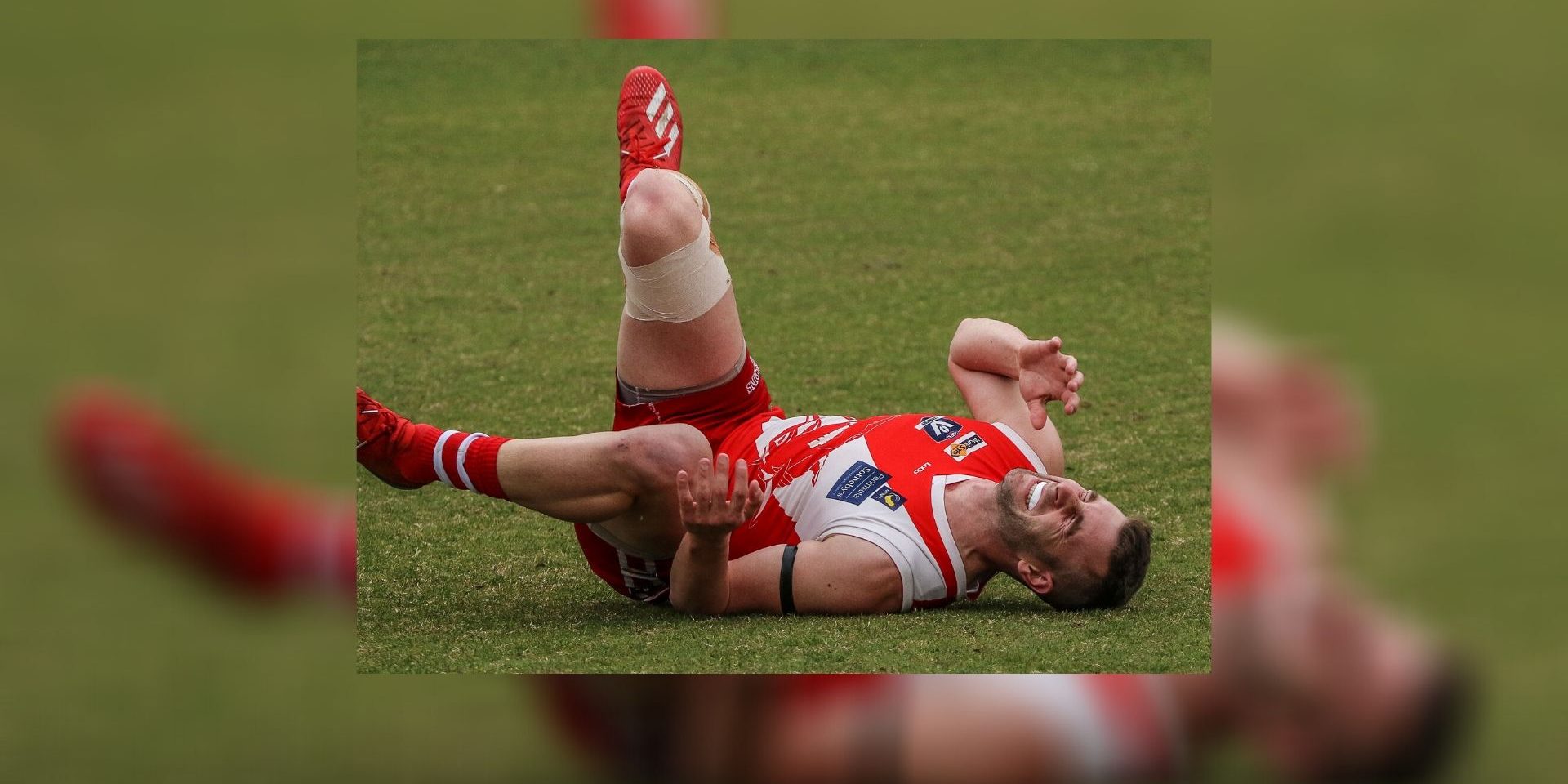 He is hospitable, obliging, and especially well-disposed to the foreigner.

No doubt all key ingredients for forging a successful career in real estate with White Fox, selling high end properties on the Mornington Peninsula, as well as captaining the Sorrento Sharks in the MPNFL with distinction and playing at a constantly high standard.

The 29-year-old loves his footy club.

“Most of my best mates are guys I have played footy with at Sorrento, so the club holds a very special place in my heart,” Hallahan says proudly.

Among his best mates is his younger brother by 18 months, Mitch, who played 26 AFL games with Hawthorn and the Gold Coast. After being delisted by the Suns at the end of 2017 Mitch wasn’t going to play footy, but James talked him into coming back to the Sharks.

“That season, even though we lost the grand final by one point to Pines, is one of my favourite moments in football as I got to play with Mitch. We had a good season in the first year of division one and played in one of the best local footy grand finals you would ever see, despite being on the losing end.” James says, with a tinge of frustration in his voice.

Hallahan’s other cherished moments in his footy career were his Sorrento senior debut against Rye, where he kicked two goals as a 17-year-old, and playing one game with Victorian Country in the 2009 Under 18 Championships.

“Mitch played the first three Vic Country games, we both missed the fourth, and I got an opportunity in the last game and played on a dual Brownlow Medallist – Nat Fyfe – what an experience that was.”

The team was coached by one of the most respected Under-18 coaches in the country in Robert Hyde, who coached the Calder Cannons to multiple flags in the TAC Cup. Hallahan chuckles when he remembers his encounter playing on Fyfe, and Martin’s already imposing demeanour.

The team was coached by one of the most respected Under-18 coaches in the country in Robert Hyde, who coached the Calder Cannons to multiple flags in the TAC Cup. Hallahan chuckles when he remembers his encounter playing on Fyfe, and Martin’s already imposing demeanour.

“We were both skinny and scrawny kids and I played at half back and Fyfe was half forward and I could not believe, with all due respects, that he was picked at selection 18 in the 2009 draft,”  he said.

“And Dusty was a man child and a really nice guy. Whenever I see him, he is always friendly.”

Hallahan’s football journey started late in 1999, at Auskick in Sorrento, and then progressing to junior teams.

‘’I was a tall skinny kid as a teenager, but lucky enough to be chosen in the Dandenong Stingrays Under-16 squad,” he said.

“I didn’t enjoy the travel early days from Sorrento to Shepley Oval in Dandenong. I was selected as a bottom age player in the under 18s but got cut in the 2007-‘08 preseason and was sent back to the under 16s.”

However, the quietly determined teenager got a reprieve after he blitzed a three-kilometre time trial, finishing third, and then dominating in a practice match – earning a place on the Stingrays’ supplementary list.

After leaving the Stingrays, James got a chance to play in the VFL with Sandringham, aligned with AFL club St Kilda. Despite becoming vice-captain of the Zebras, where his leadership skills were first appreciated, he actually fell out of love with footy and made the decision to step away from the club at the end of 2012.

“I did a pre-season with St Kilda going into 2012, but did not feel comfortable,” he said.

“I was disappointed in the way the St Kilda listed players, who played with Sandringham, were treated and was going to have a year off, that’s how disillusioned I was with the game.”

He returned home to reside in his beloved Sorrento and remained non-committal to playing with the Sharks. But the coach at the time, former Saint Troy Schwarz, encouraged him to have a run.

“I got welcomed back with open arms and had a great season. We were undefeated going into the grand final but we got thrashed,” he recalls.

Although red-hot favourites when defeated in that grand final of 2013, Hallahan says the 2018 grand final loss to Pines, with a kick after the siren, was more disappointing. It meant not being able to share the ultimate with his younger brother Mitch, in his return to the club.

Hallahan remembers with pride the 2017 season, where the Sharks won the flag despite parting ways with Nick Jewell as coach during the year.

‘’Nick is a great coach, I would play under him any day, and I improved myself as a player and a person under his leadership – in my opinion he should be full-time in the caper.”

He remembers 2017 as being draining, especially during the time that Jewell and the club parted ways.

“Tappy (Luke Tapscott) was going to coach but was not ready yet so Troy (Schwarze) steered the ship, but everyone chipped in and we won the flag in the last year of the Nepean Division which was very satisfying.”

“I suppose they thought I had leadership skills but seriously it is not difficult being captain of Sorrento as five or six players could do it.” 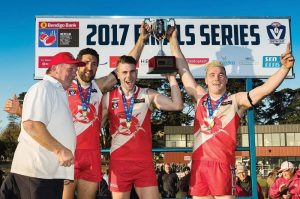 Those humble words sum up the obvious qualities James Hallahan. He has an unwillingness to praise himself or talk himself up and he comes across as a guy that many fathers would be more than happy for their daughter to bring home.

Isabella Tuddenham has been James’ partner for the past three and a half years, with her grandfather Des an iconic player and captain at Collingwood and also captain-coach of Essendon in the 1970s. Des is regarded as one of the toughest players of his generation, while Isabella’s father Paul also played some quality games at Collingwood. 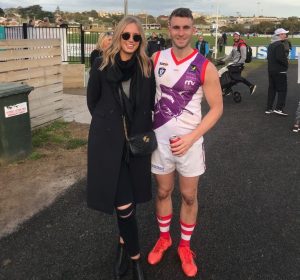 After losing the 2018 grand final by the closest of margins James felt enormous pressure on him as captain in 2019. This escalated even further when he appeared to suffer a season-ending knee injury against Pines in a VFL curtain raiser at Frankston Park.

However, that quiet determination which has become his hallmark drove him to rehabilitate the knee without surgery and return to lead his team into finals.

“The pressure on me to perform after the injury was certainly there and to be honest, I thought originally when I suffered the injury the world was caving in around me.”

Hallahan played well in the second semi-final trouncing of Dromana, although rumours surfaced that he may have re-injured his knee.

He kicked an inspirational goal in the second quarter of the grand final but hyper extended the knee, although he has played down the severity of any damage from that incident.

Fast forward nine months and he says the knee is in good shape. In fact it is so good that he has been running long distances while the footy season is on hold, including running a marathon on Anzac Day. The knee pulled up well although some of his joints were a bit sore.

Hallahan was thinking of finishing up last season until being voted in as captain for 2020. He has continued doing plenty of training, mainly running without footballs since February. He understands that Sorrento is not the most popular club in the league outside its loyal band of supporters.

“But if you get to know us you realise we are a tremendous organization and I just love being here.”

James says his parents, who drove him and Mitch everywhere to games and sometimes long distances, have been the biggest influence on his career.

“Dad was a good player as a junior and played for Geelong Under 19s before badly damaging his shoulder,” he said.

“At times he was hard on us regarding our performance but he is definitely our biggest supporter.”

Outside of footy, working with White Fox Real Estate, and spending time with Isabella, the Sorrento skipper loves playing golf with his teammates and travelling, but he is a bit embarrassed when asked what he does not like.

“I don’t like sharks, even though I play for them.” he says with a laugh.

“I am quite a good swimmer, but due to my hatred of sharks I will only go into the water at the beach provided I am at a depth that I can stand up in . Any further than that and I hate it.”

The MPNFL and Sorrento are lucky to have James Hallahan, his leadership skills and outstanding footy talent…it’s one of the main reasons why the Sharks continue to be one of the strongest clubs in the competition.