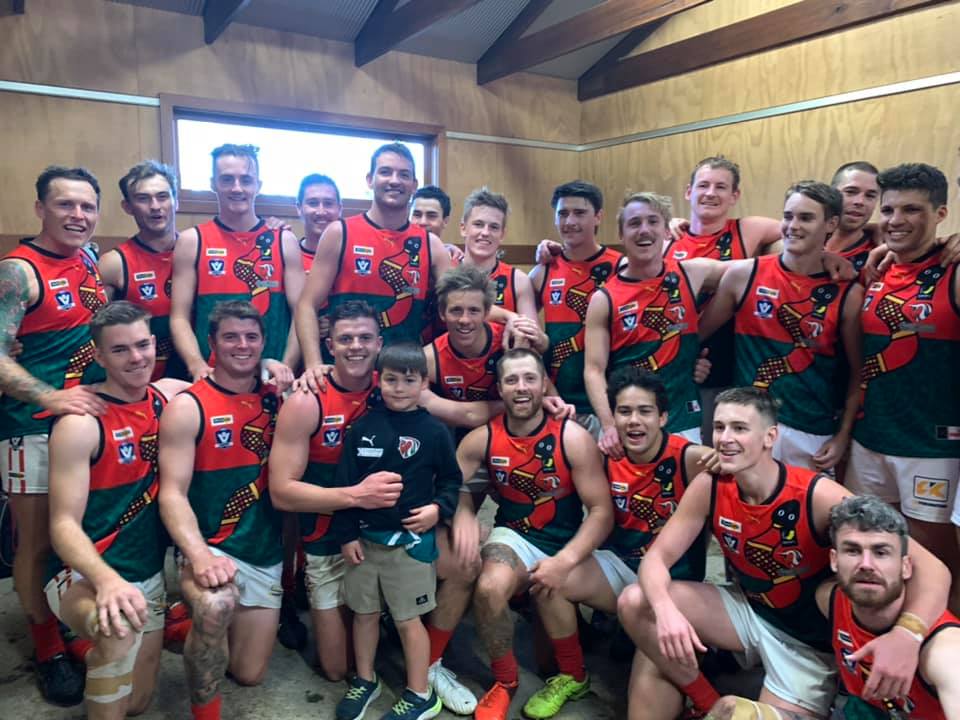 After an old fashioned style Training on Thursday, the Pines snagged their first win of the season defeating Red Hill on top of the Mountain. The Pythons were ready for the fight with experienced campaigners showing the way, working well with younger heads to lead by 8 heading into half time. But the Hillmen came out determined to kick the 4 of the next 5, locking down Pines routes to goal, and took the lead heading into the final quarter. The Hendry brothers however had other plans, kicking crucial goals early, while Nick Boswell was able to put away 2 goals late in the last to lock away the 15 point win, and finish with 4 for the match. Guy Hendry finished with a big bag of 5 as well, Beau Hendry was named best on for the Pythons with 25 hit outs to add to his 2 goals, and Lachie Marshall was a tackling machine. Josh Mold was best for the Hillmen with 27 and 5 clearances, and Steve Morris fought hard around the ground.

It was a tight game at Olympic Park where the Frankston Bombers completed a come from behind win against Rosebud. It was a scrappy first half where both sides were inaccurate, kicking 4 goals 14 between them, but Rosebud were the first to find their feet after half time, kicking 5 goals 8 and dominating all around the ground in the third term. But both sides had their supporters out in full force, and the Bombers were willed back into the contest. The scores were levelled late in the match, before a long kick from outside 50 from Jake Greely in the final seconds drifted through for a behind to break the deadlock. Alex Harnett was at his dominant best for the victorious Bombers with 40 possessions. Keegan Downie was vital for the Bud’s in a half-back role, collecting 33 disposals, 12 rebound-50’s and 5 intercept marks.

Frankston YCW continue to be a bogey side for Dromana, as the Stonecats walked off victorious in a 37 point rout. It was an interesting affair where YCW had an accurate start kicking 5 goals before quarter time. The Tigers, in response, moved the ball well in transition, but struggled with the final connection to the forward 50, where the Stonecats impressive defence held firm, and they were able to get plenty of players around the ball, to win the contested ball. It all seemed to be over by 3 quarter time with the battered and bruised Dromana outfit unable to re-enter the contest, allowing YCW to get their run game going to finish with 13 goals for the match. Roan Steele kicked 3 majors with 23 disposals whilst Sam Guerts for Dromana continues to star with 40 touches.

Mt Eliza received another scare on the weekend, grinding out a 1 point one over Edithvale-Aspendale. A hot but inaccurate start had the Redlegs set up well for a romp, seeing the Eagles failed to score a goal in the first, but they were up for the fight, kicking 8 goals straight heading into halftime with a 13 point lead. Coach Steve Brattle must have given his Redlegs a solid spray as a result, and they came out firing to take the lead heading into the last, before stalling yet again, with the Eagles shutting down Mt Eliza’s forward line completely, keeping them scoreless in the last, however one final push was not enough, with the final siren sounding a Redlegs win. Tom Rourke was excellent for the Eagles with a 5 goal haul and was named best on for his side, while Michael Bussey, Mick Meehan and Steve Mannix all stood up and walked away with their heads held high. Young Jeremy Burton was best on for the Redlegs with 27 touches and a goal, while Elliot Simmons kicked 2 goals from his 14 touches.

Bonbeach and Sorrento played out an interesting contest on Saturday. Bonbeach held the lead at each break, but Sorrento were able to stay in the contest until the last quarter, being just 2 points down at the time, but a shoulder Injury to Leigh Poholke cut Sorrento’s avenues to goal, with the last quarter being all one way traffic, Bonbeach kicking 7 goals to one in the last quarter to run out 38 point winners. Nick Corp was solid with 3 goals from his 10 disposals, and Lachie Croad dominated the ruck, and James Hallahan also put in a solid performance. For Bonbeach, Trent Dennis-Lane kicked another 4 goals to increase his lead in the goalkicking and Mitch Gent was named best for an impressive Midfield performance with 4 clearances and 6 inside 50’s.

Chelsea’s hot streak came to an end this week at the hands of a Langwarrin outfit that remains undefeated. The Roos’ held Chelsea to just one goal in the first half, a brilliant running goal to playing coach James Brain from the 50m arc. From half time the match was already over, but 4 goals in the last quarter reduced the margin back to 46 points. The Gulls’ were thoroughly beaten all around the ground, losing the disposal count, hit-outs and Clearances. Zach Andrewartha was electric again with 3 goals from 29 touches, pushing his case for VFL selection, and Ryan Smyth was solid, being named best on. Shaun Foster had 33 for the Gulls, and 8 inside 50’s to be best on, and apprentice  Zane Carter had 35 himself.

Devon Meadows continue to be a bit of a surprise packet, beating Hastings by 23 points. A hot start, with 5 goals, with an early goal to Brett Deledio, one of his two for the match, set up the Panthers well against a depleted Blues outfit, while Hastings inaccuracy also caused issues, with 15 behinds for the match proving their downfall. Jordan Smale found himself kicking 4 goals while the Hillis brothers were again best on ground, Joel having 24 touches and Rory 26. For the Blues, both Taylor Stratten and Matt Foy kicked 2 each, while Peter Mcgee was named best on, Wayde Delahaye had 21 touches and 3 rebounds.

Pearcedale defeated Tyabb in a strong and morale-building win by 9 goals. A 20 point first quarter margin, thanks to Luke Daniel kicking all four of their goals for the period, ballooned to 48 points heading into half time, and the Yabbies never found a way into the contest. Another 6 goals to Pearcedale clinched the win, with Tyabb only managing 6 goals for the game. Luke Daniel is sure to earn player of the round honours with his 7 goal total from 17 touches. And Kaolan Thornton had a massive 43 touches and 6 clearances. For Tyabb it was the usual subjects with Ethan Rahilly and Zach Cacciavello finding the ball,and Rhys Chalkey was their only multiple goal scorer with 2 for the match.

There has been an interesting reversal of form for Rye in the last two weeks, crashing to 5th after a 105 point loss to Seaford. The first quarter was a tight, high scoring affair, with Seaford just 13 points ahead, but it became a mismatch quickly, with the Tigers kicking 7 goals, with 3 goals in 4 minutes pushing their score out towards the triple-digits before half time. From there it continued to be one way traffic, as Rye failed to contain what was an unstoppable and potent Seaford forward line, allowing 10 goals across the second half, including 3 fourth quarter goals to Matt Ravenhall. But for the Tigers, Tim Broomhead was a definitive best on ground with 4 goals from 35 disposals, and Sam Lonie was named best on. Matt Hill was a Bull in the midfield for Rye with 36 whill Nick Strickland had 37 from the backline.

Karingal was able to walk away with a solid performance over Crib Point. Down by just 7 points at quarter time, Crib Point would have fancied themselves to be in the fight, however a 4 goal to 1 second quarter changed the narrative in Karingals favour, and the lead only grew throughout the rest of the game, as they won by 43 points. It seems as though a visit of the MPNFL Footy Show brings out great performances, with Karingal Stand in captain Sam Glenn kicking 4 goals in a best on ground performance. While Seth Kelly kicked 2, and Tom Curren and Laughlin Cowell featured in the best. For the Magpies, Miles Shepherd kicked 2 and featured as the best, alongside Archie Shepherd and Kevin Van Den Berghe featured as well.

Somerville found themselves completing  a stirring victory over Mornington at home. Somerville found themselves with an 18 point lead from less inside 50’s. But the Bulldogs seemed to dominate the second quarter, everywhere but the scoreboard, kicking 3 goals 10 for the first half to still trail by 8 points. Their inaccuracy proved costly as Somerville found no issue slotting through their goals, and led for the remainder of the match and won by 31 points. Lachie Williams kicked 2 goals for the Eagles, while Luke Rowe was excellent down back to be named best, keeping Jackson Calder goalless. For Mornington Matt Caine was named best on, and Jai Richardson had 20 disposals, while Adrian Speedy finished with 30 touches and a goal.