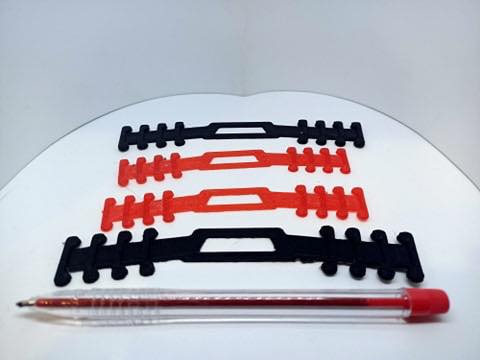 27-Year-Old Jake Craddock is a self-proclaimed sci-fi nerd. Born and raised in Frankston, Jake was always interested in 3D-Printing and model making, and when the technology had become affordable, Jake decided to purchase one to begin making his own models to sell online.

Once Coronavirus hit, however, One of Jake’s friends came to him asking to come up with an idea to create an ‘ear protector’ for when people are wearing masks.

A small contraption placed at the back of the head with the ability to loop the mask around the head instead of relying on the person’s ears to stay hooked.

Jake then decided he could use his love of 3D Model making to help the community, and decided to create a few more packs of 3, and leave them out the front of his court in a box.

Jake then took to multiple Facebook community groups online to let people know he was giving away these ear protectors for anyone who was after some, little did he know, the response he received was overwhelming.

Jakes post received 350+ likes and 100+ comments in just a couple of hours. With people coming from all around the area to come and collect the contraption.

“It just went nuts, It went crazy, With all the orders, I’m so backed up, I was up until 2:30 am last night printing them,” Jake told GCN.

“I was contacted by one guy, who had something to do with a PPE equipment company who was interested in giving some out with every order, but he wanted an order of 800, which I just couldn’t do,” Jake said.

It took Jake roughly one and a half hours to create eight ear protectors in his current 3D Printer, and after roughly 7-8 hours of printing, somebody in a silver Prius had violated the rules of ‘one per person’ and decided to take the entire day’s work from the box.

“Being blunt, I was kinda pissed off,” Jake said. “Now I have my wireless doorbell out there, people can ring it and I’ll come out with one pack.”

Jake decided that to keep up with the orders, another 3D Printer would be required to help, so he decided to make a GoFund me page to raise money for a second one.

“I thought maybe I could get the community help and maybe we could organise once it had calmed down to donate it to a local school or something like that,” Jake said.

Very quickly, Jake managed to raise close to $600 of his $1000 goal when a woman named Nicole from the Facebook page Frankston Community Noticeboard got in contact with him to help draft a letter to send off to local businesses to help support.

“She told me she had spoken to the area manager or state manager of Jaycar Electronics in Frankston, and they had decided to match everything I had raised so far to help fund the printer,” Jake said.

“I went down straight away and picked it up, I Couldn’t believe it when she came back with that news, I was stunned!”

Jake has also organised to donate the printer to McClelland College in Karingal once he is finished with it.

“Anything I can do to help,  few people collecting them have said they were aged care workers and nurses from Frankston hospital as well nurses in training from Chisholm in Frankston,” Jake said.

“One nurse showed me the back of her ear, it was so red, it looked like it had been cut or something, it was so bad.”

Jake also told GCN he was astounded by the response from the local community in regards to the ear protectors.

“As I told people I wasn’t taking donations directly, people started bringing over little gifts, hand made and surgical masks, one lady even bought me some muffins!” Jake said.

In Jake’s latest update on his GoFund me page, the second printer is going great and is printing out as many ear protectors as possible, a good supply is ready to be given out for Thursday.

After that, Jake said he is going to have a week hold on the handouts as he is going to concentrate on supplying to the Frankston Hospital and a few aged care facilities in the local area.

Jake also said he’s looking into potentially getting a third printer if demand continues and donations keep coming in.