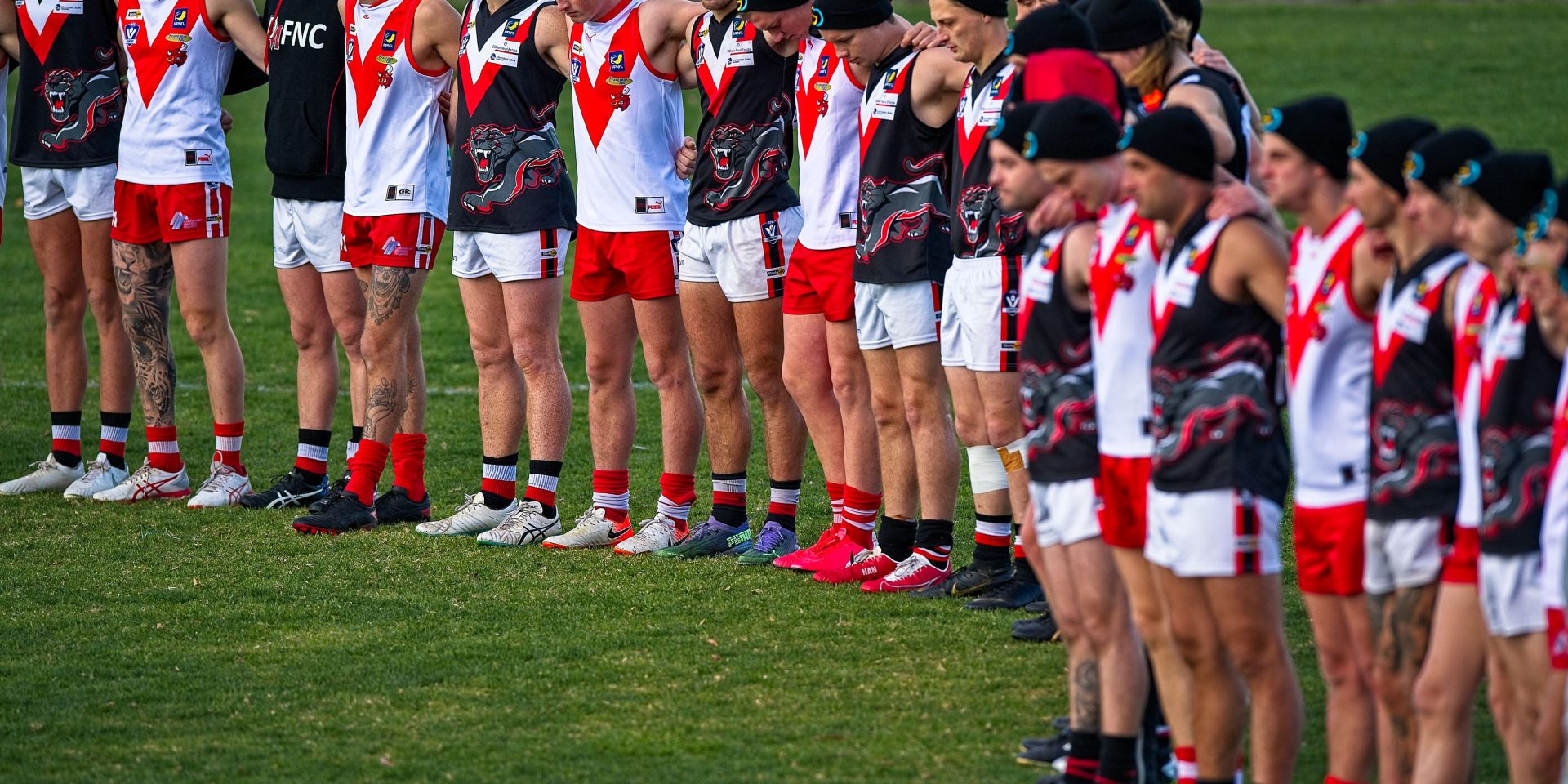 The Frankston Bombers have won a nail-biter for the second consecutive week, with a ‘down to the wire’ win over premiership contenders Bonbeach. The Bombers started the game kicking to the scoring end where they took an early lead. But Bonbeach then controlled the contest around the ground, although the Bombers accurate goalkicking kept them in the game. Ryan Marks-Logan was the Bombers saviour in what many Bombers past players were calling “the best individual performance” they have seen. He found himself in unfamiliar territory up forward at key moments due to Corey Buchan going down with a hamstring, and he finished the game with three game-changing goals. The Sharks will be pleased that they were able to control the game despite getting beaten in hitouts and therefore clearances. But without spearhead Trent Dennis-Lane, they were unable to kick a winning score with the Bombers clinical display up forward. Fox and Harnett combined for 70 disposals for the Bombers whilst Jackson Casey had a brave captains game for the Sharks with 28 and a goal.

Sorrento bounced back this week to hand Dromana an 11 goal loss. In the somewhat muddy conditions the Sharks were able to jump to an early lead before two goals to Ethan Johnstone brought the margin back late in the first. The Tigers looked to be in the fight heading into half time as well, only 19 points down and looking hungry, but the Sharks came out firing, and locked down Dromana’s transition attack, as for the second week in a row solid defensive work by the likes of Luke Brigden and Daniel Grant kept the Tigers from entering the forward line consistently, and the likes of Mitch Hallahan making plays that only grew the lead.  For Sorrento Nick Corp was the best on with 4 majors, from 21 disposals. While the Hallahan Brothers, James and Mitch featured, with James kicking a hand 3 himself. For Dromana, Billy Geurts was able to dominate, with 54 hit outs and 262 ranking points, while Ethan Johnstone kicked 5 goals.

It would have been a big night at Edithvale-Aspendale as they secured their first win of the season against Pines. The Eagles were able to gain early ascendancy in the match but from there it was blow for blow throughout, with neither team able to grow the margin far, and the Pythons closed the gap to just five points, before Michael Bussey threw the team on his back, kicking 3 goals for the match, to will them over the line by 21 points. The Eagles defence was solid in the last quarter, keeping Pines to just one goal and stalling out their attack. For Edi-Asp, Nick Carlon was named best on, while as mentioned, Bussey kicked 3 goals, and won 20 hit-outs, and Sam Monaghan also kicked 3. For Pines, Lachie Marshall was best on with 24 and 8 clearances, while Jayden Adams also featured.

Frankston YCW continue to stamp their authority over Division 1 with a 29 point victory in the freezing conditions at Red Hill. Both teams found it difficult to score early, with the wind playing a factor, but the Stonecats were able to score 3 goals, and the Hillmen found themselves with the yips as they struggled to kick straight throughout the match. This isn’t saying YCW had an easy time either, as both teams struggled to find avenues to goal, but thanks to the likes of Matt Troutbeck (2 Goals) and Josh Butland (3 Goals), the Stonecats were able to do enough to walk away winners. For Red Hill, Marcus Del Lago was named best with 21 disposals and clean ball handling, and the Mold brothers were also solid. For YCW, Matt La Fontaine continues a good season to be named best yet again with 19 touches, and Kaiya Dias impressed.

Mt Eliza enjoyed a confidence building win over Rosebud at Olympic Park. The Redlegs had a solid intensity in the first quarter and held Rosebud scoreless to hold a 6 goal lead heading into the first break. From there, Rosebud were able to hit back however they seemed to be just a step behind the Redlegs all afternoon, and were unable to close the gap all day, to fall by 21 points when all was said and done. For the Buds, Fletcher Hustwaite was named best on with 25 touches after an minor injury last week, and Jack McCrae was admirable down back. For Mt. Eliza, Lachie Williams slotted 4 goals, while Tom Small had 25 touches and 10 Tackles.

Langwarrin continues to be the gold standard in Division 2 football, winning by 70 points over a young Crib Point Side. It was a somewhat high scoring first quarter, with the Kangaroos hitting 50 points in that time, and Crib Point were able to score 21 themselves, but two points in the second, thanks to Langwarrin’s defence, and the margin reached 10 goals in no time. From there, the margin grew slowly, but Steve Hamill can be pleased with his Magpies side, as they were still able to manage 17 scoring shots for the match, with Joel Wisken kicking two. And Tim Cook was named their best. For Langwarrin it was the usual subjects with Andrewartha and Blake Peach having 37 each, while Josh Dormer and Mitch Mathie kicked 3 each.

Somerville completed a strong win over Tyabb with a 133 point final margin. It was a case of one way traffic for most of the first half, with Somerville piling on 62 unanswered points in that time, with two early goals to Paul Fermanis, who left the game early with soreness, and two to Jesse Walker-Swain, in a defensive forward role that kept Ethan Rahilly noticeably quiet, it wasn’t until the third minute of the second half until Tyabb posted points, with a goal to Damian Playne, but the margin only grew, even with two late goals to Darcy Sawyer reducing the margin back slightly. Lachie Willams was named best for Somerville, but Ryan Gillis stole the show with 7 goals for the match, meanwhile Jordan Thomas was named best for Tyabb, and Zach Cacciavello was also solid.

Mornington ground out a win in a classic against Chelsea. The Gulls were able to put on a 15 point lead at quarter time, but Mornington were able to get back into the contest quickly, and took the lead heading into half time from there it was a tight tussle, with just 2 goals in the third, before both teams fought desperately for the win, but Mornington walked away with a tough 10 point victory. Matt Caine continues his impressive form post Live and Loose appearance, being named best for the second week in a row, while Jackson Calder kicked 3 goals in a return to form. Playing coach James Brain kicked 2 for Chelsea, as well as Shaun Foster, who had 25 touches as well.

Seaford continue their solid form with a win over Pearcedale. Pearcedale were down by just 19 points heading into the first break, before Seaford stamped their authority with a 4 goal second quarter, to push the margin out to 38 points. From there the Tigers kicked away, and ran out 76 point winners. The Dales improvement this season was evident however, with 7 individual goalscorers, with Luke Daniel and Corey Hanger kicking 2 goals each, and Connor Benwell and Kyle Van der Pluym found plenty of the ball. For Seaford, Tim Broomhead added another 4 goals to his tally, and Damien Rayson had 29 touches and a goal.

In the showcase Game Changer Match of the Round, it was a classic 8 point game, where Devon Meadows continue their push into finals contention with a stirring 6 point win over Karingal. It was a low scoring affair but held high stakes as inaccurate kicking by the Bulls saw the margin reach a game high 18 points heading into the main break, in Devon’s favour, but Karingal Coach Luke Forsyth had his men come out firing in the third, piling on 5 straight goals in an excellent display of team football to take the lead heading into the last quarter. But the Panthers came out with resolve to kick 3 of the 4 final quarter goals to be up by 6 with minutes to go, but the Bulls continued to charge, mounting a counterattack with just minutes to go that was intercepted by Joel Hillis with an outstanding mark, saw the game become a seven point margin. Karingal got one final chance in the form of a late free kick to Seth Kelly, which was touched in a desperate leap  by Brady O’Toole sealed the game. Ty Kirkwood kicked 3 goals for the Panthers, and both Hillis brothers were impressive as well. For Karingal, Ashley Cadd was named best on, while Tom Curren had 29 touches and Seth Kelly kicked 2 goals for the match.

Hastings returned to the winners list with a 4 goal win over Rye. Four first quarter goals to the Blues gave them a 16 point buffer heading into quarter time, but the Demons found a way into the contest from there, with the margin shrinking by the third quarter thanks to three goals to Kalani Ryan in that time, and three to Playing coach Adam Kirkwood, giving them the lead heading into the last quarter, but solid defensive play by Hastings held the Demons to just one behind, and two fourth quarter goals to Luke Hewitt sealed the game in Hastings favour. Hewitt finished with 3 for the match, as well as Luke Clark, but Wayde Delahaye was named best on for his dominant ruck performance. Kalani Ryan was named best for Rye, while Tyrren Head also featured.