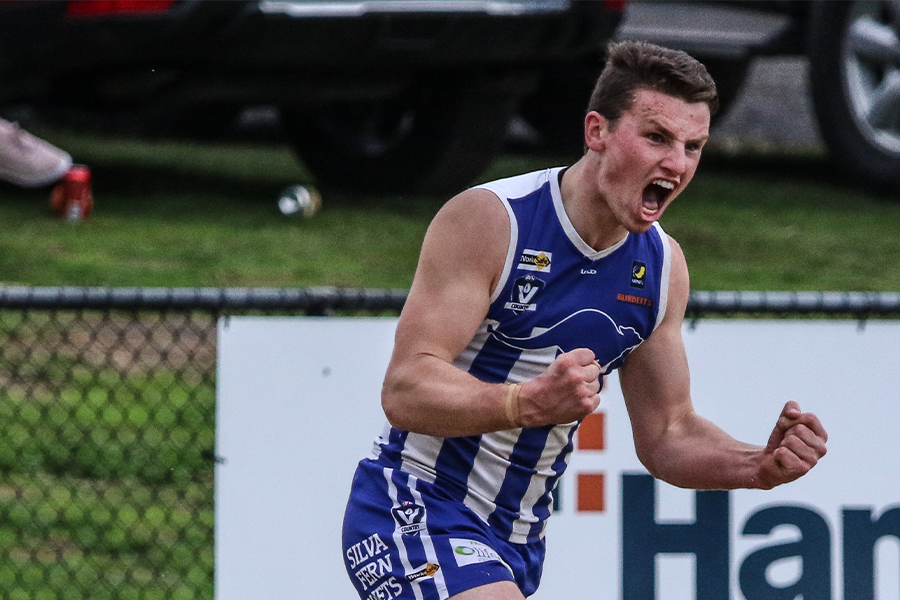 One of the most improved players in the second division of the MPNFL last year was Langwarrin forward, Matthew Peynenborg.

The 21-year-old, who turns 22 next month put his excellent 2019 down to a great pre-season. “I got stronger and spent plenty of time in the gym.” He said.

“I was happy with last year and he was really looking forward to this season,” Matt said speaking about how his hardest opponent, Red Hill’s Jonah Siversen, who has moved into the first division. “He is very hard to play on.” He explained with a tinge of frustration in his voice.

After kicking almost 40 goals in a season where his beloved kangaroos again bowed out in a preliminary final, his aim this season was to kick 50 goals. “I felt pretty good in the lead up to this year and to kick 50 was the aim.”

He believes being back at training has been good for the mental welfare of players. “Everyone has been enjoying each other’s company and being able to see our teammates again. It is good to be active again instead of doing nothing, which no doubt will help with mental health.”

The Langwarrin Football club is a family affair for the Peynenborgs. Matt’s father, Adrian is the Vice President and his mother, Louise and sister, Sophie, are also involved with the club. Matt is Langwarrin through and through having played 150 games with their strong junior program, starting from the under 9’s before progressing through to the seniors.

Matt also works in the family cabinet making business and is in the final year of his apprenticeship. “Dad is great to work for, He doesn’t really say too much besides ‘Don’t stuff up’.” He says with a laugh. “He’s tough but fair.”

Matt was also in the Dandenong Stingrays Development Squad in the under 16’s in 2013/2014 playing with Tom Murphy, who has gone onto represent North Melbourne in the AFL last year. Matt also knows Zac Foote, who was drafted by Sydney in 2018.

Outside of footy, Peynenborg plays plenty of basketball and loves to travel, most recently to Europe at the end of last season. His favourite country was Belgium. Matt also loves his cars. “I would love to own a 918 Black Porsche,” He says with enthusiasm.

Peynenborg describes fellow key forward, Gerard Brown as having the biggest influence on his career so far. “He has always offered me advice and it has been great watching the way he plays, It’s really helped me develop.” Matt is also delighted to have former Essendon player Mark Baguley at the club and would love to play some games with him.

Matt has been in a relationship for the past 8 months with girlfriend Freya, who is studying to become a nurse. “When I get down mentally, I can always talk to her, It’s a great help.”

Langwarrin is lucky to have a loyal servant in Matt Peynenborg at the football club and look forward to him playing a significant role in the roos’ quest for the holy grail.