As Karingal had their first meeting this week to start preparing for next year, they were stunned by the news that their inspirational captain, Andy Mathers, won’t be wearing the red and white next season.

Coach Luke Forsyth thought he was joking when first told and admits he tried to talk him around. “However, if someone doesn’t want to be at the club, you can”t force them,” he said.

Mathers, who joined the Bulls in 2018 and was Best and Fairest in his first season and runner up to Cal Dixon in their grand final year in 2019, says he had lost his passion to stay and play for Karingal.

‘’It is hard to explain, but there has been a feeling for some time that it was time to move on,” Mathers said.

The star midfielder injured his groin in the pre-season. “Once I suffered that injury, any interest I had in playing waned and when COVID hit, there was no interest at all,” he said.

Mathers loves cross fit training, which is high intensity weight training, gymnastics, rowing and running, and got back into it last year around MPNFL finals time. He had given it after giving it away  after breaking his arm one match into the 2016 season, when he was playing with his older brother, Rich, at the now defunct Mount Waverley in the third division of the Southern Football Netball League.

“They went through undefeated that season and won the flag, but I missed out due to the injury. I stayed the next year though and loved playing with Rich and travelling to and from training and to the games with him.” Mathers said.

Rich made the decision at the end of last year, after another season in the reserves, to leave the club with family commitments, having two small boys and a new business servicing pools with Andy, becoming key priorities in his life.

There also seemed to be some frustration that he was not playing seniors and Andy believes he would still be at the Bull Pit, if his older brother was playing senior footy with him.

Senior Coach Luke Forsyth says no doubt Andy will be missed, but as far as he knows does not think he will play footy next year at this stage.

“He loves cross-fit training… He seems to live and breathe that, not footy, even though he is very good at it,” he says.

Forsyth knows both Rich and Andy were disappointed Rich wasn’t considered for the seniors last season, but he did say to Andy’s big brother before pre-season that there was a spot for a key position player in his team.

‘’Andy McInness was having a year off and I said to Rich, there’s a chance for you to play at centre half back or up forward, but he told me he couldn’t commit.”

Although Forsyth believes Mathers won’t play next year, Andy has not ruled out having a kick with another club.

“I won’t be thinking about it for a month at least. I have to be 100 percent committed, but it would be nice to play with Richie again and I would not rule out playing at the highest standard possible whatever that is,” he said.

Mathers says he leaves Karingal on good terms and is happy to rate the Preliminary Final win last year over Langwarrin as his favourite moment with the Bulls.

“That was a fantastic day. We were so happy,” he says proudly.

Forsyth is convinced Mathers exits the club better than when he arrived.

‘’If or when the hunger returns, he will be welcomed back with open arms as he is a great player and person,” Forsyth said.

Mathers says it was tough telling Forsyth he was leaving. “He is one of my best mates, but you have to be honest with yourself.” 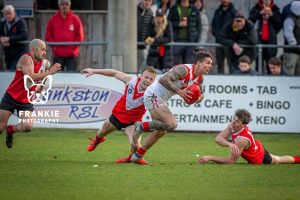 Forsyth knows Andy will be missed, but in positive news for the club, new recruits for the aborted 2020 season, including Peninsula Old Boys pair, Jordan Pommeroy and Sam Glenn have re-signed as have Ash Collins and ruckman, Matt Blair from University Blues.

‘’Those guys have already been added to the leadership group and will be great assets to the club.” Forsyth said.

For Andy Mathers, who knows what the future holds footy wise for one of the MPNFL’s best midfielders of the past two years, but it will certainly be a case of watch this space.