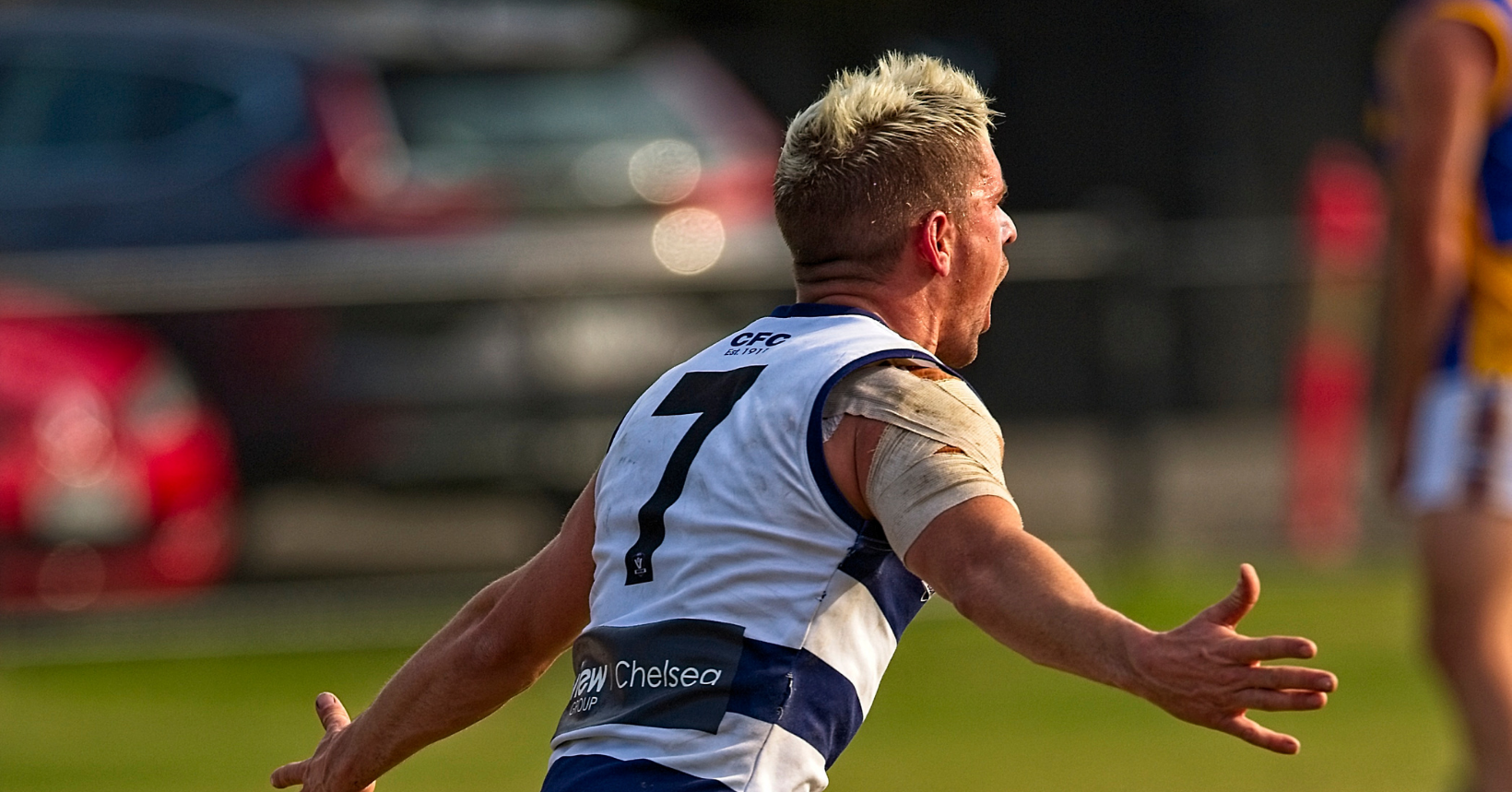 The Frankston Bombers got into gear this week with a solid win over a Siversen-less Red Hill. The Bombers were able to keep the Hillmen to just one goal in the first half, with Tom Slattery scoring 25m out. From there the Bombers never truly let them back in, but inaccurate kicking, with 21 behinds for the match, saw the margin be much closer than the stats sheet would suggest. Corey Buchan was electric for the Bombers with 2 first half goals and 3 for the match, while Khan Haretuku kicked 2 goals and was a prominent figure. Harry Prior continues to dominate the Hit-Outs having 36 and the latter 42. Jono Ross was kept quiet this week being kept to just one goal, while Kane Hawkins fought admirably down back, with 17 Rebound 50s from 43 touches, while Danny Allsop was impressive with 37 touches and 5 clearances.

Pines had what can only be described as a day to forget with Dromana delivering a 109 point hiding. The Pythons were just 2 points down at quarter time before an impressive defensive performance held them to just 4 points in the second, allowing the Tigers to build a 42 point buffer at the long break. From there the margin only seemed to grow with a 16 goal to 6 second putting the game to bed. For the Tigers, Reece Wilde was named the best with 4 goals, and Ethan Johnstone kicked 4 goals himself. Billy and Sam Geurts combined for 5 and outclassed their opposites on the Pythons’ squad. For Pines, Guy Hendry kicked 3 goals while Ned Moodie kicked 2, and Ben Thomas was named Pines best.

Frankston YCW ventured to Regents Park to face a EDI-ASP team who face a very long season as they suffered a 11 goal loss. A five goal to 1 first quarter for the Stonecats turned into a 53 point buffer heading into half time, with their class simply being too much, but there was an improvement in their performance from last week, with Mick Meehan kicking 4 goals from 13 touches, and contested beast Steve Mannix still being the pick of their midfield, with 32 touches and 5 inside 50s. YCW was able to share the goals around, but Josh Butland had an outstanding day with 7 majors, while Lachie Wallace and BJ Credlin continue to impress.

Bonbeach bounced back to send Rosebud crashing back to reality with a 70 point victory. Bonbeach kicked the first 4 goals of the match and never looked to give the lead away, with their defensive pressure keeping the Buds’ forwards at bay. Their dominance was matched only by their inaccuracy, as they kicked 20 behinds for the match in what was as close to perfect conditions as there were likely to be for some time. Rosebud will likely be frustrated with the performance on the day, as they were only able to kick 5 goals for the match, with Liam Tidd being the pick of the scorers with two. Jackson McRae battled hard for the Buds with 11 one percenters and 6 rebounds, while Dale Marshall also found the ball coming to him often. Trent Dennis-Lane returned from his assistant coaching role with Sandringham to kick 4, while fellow Ex-Saint Sam Gilbert had an absolute belter with 43 disposals and 8 clearances for 182 Ranking points.

It is sure to be looked back on as one of the best games of the season as Mt Eliza were able to win in a last gasp effort over Sorrento. It was an even first quarter before Sorrento found themselves up by 25 points. But the Redlegs were able to hold them to just 1 goal in the 3rd and managed to take the lead, and from there it was a blow for blow affair. Sorrento lead late by just two points before Shawn Watson kicked the winner with just moments to go. And when the final siren sounded, the home crowd erupted, and stormed the field in celebration, to which one AFL player in attendance for the opposition, Max Gawn, could not believe. Watson was joined by Will Antonie in kicking 3 goals, and interestingly, not one Mt Eliza player reached 20 disposals, with Braden Nelmes having the most with 18. Leigh Poholke returned for Sorrento to kick 6 goals while his brother Myles kicked one with 4 clearances. Liam Frazer found plenty of it as well for the Sharks with 11 inside 50 entries.

Chelsea proved that last week’s performance was no fluke, by toppling Somerville to the tune of 21 points. Somerville led by 19 points at the long break but elite defensive work kept the Eagles to just 1 point for the 3rd. The effort was rewarded as they kicked 5 goals in the last to complete a memorable turnaround. Todd Gardiner was the best for the Gulls kicking 5 goals from the midfield, While Shaun Foster is finally getting recognition in our Premier Data statistics with 33 touches and a goal. Ryan Gillis was kept quiet and did not kick a major, while Luke Burton was solid kicking 4 goals. Travis Bravo was named best for the Eagles with a solid midfield performance.

Saturday’s Match of the day brought GameFace to Alexandra Park where the undefeated Rye faced Mornington. The first quarter seemed to be a blur for the Demons, as Mornington used their home ground advantage well, effortlessly transitioning through to their forwards as they took a 25 point lead into the first break. The second quarter seemed to bring more of the same as the Demons always seemed just a step behind. And by the start of the last quarter the game was out of reach, already nearly a 50 point buffer. Rye were able to score a couple of goals late, but the final margin was still 47 points. Jackson Calder was unstoppable kicking 7 goals, but it could have easily been more if not for some inaccuracy, kicking 5 behinds as well. Adrian Speedy was also finding plenty of the ball while Nathan Heath was named best with 28 touches and 5 tackles. Michael McGowan was solid for Rye against his old side and won the hit out battle and Kalani Ryan put in a good performance with 21 touches and a goal.

Tyabb are now winless through 5 games after Devon Meadows won by 48 points. In another game where the winning team will rue their accuracy, the Panthers could only manage 11 goals from their effort, and were inaccurate with 18 behinds, but in response Tyabb could only manage 5 goals for the match, and so questions will need to be asked as to how their season can be turned around. Ethan Rahilly continues to be strong with another 35 touches and a goal for the Yabbies, while Zach Caccivello was battled manfully for 22 touches and a goal. For Devon Meadows Rory Hillis was named best on, and Lachie Batten kicked 2 goals.

Seaford and Crib Point played out what was an interesting game of football, where the margin was just 13 points at half time, but a 9 goal third quarter for the Tigers put the game to bed, and Crib Point could not find a way back in. The Magpies kicked just 3 goals after half time and fell by 89 points. Aaron Walton was skilful in the forward line with 6 majors, while Tim Broomhead kicked 4 from 29 touches, and Ishak Bashir is continuously impressing with 2 goals and 35 touches. For the Magpies,  Harry DeKleuver fought hard, while Cooper Wisken had 6 rebound 50’s.

A high scoring affair at Tractor Park occurred this week with Karingal walking away with the Points over Pearcedale. The Bulls held early ascendancy being 32 points in front at half time, and reached the ton by the third, but the Dales made a late push to only fall by 22 points. Luke Daniel kicked 6 goals spending time up the ground and through the middle, while Cruiz West was named best with 27 touches and 5 one percenters. However one player has stolen the show, with Karingal’s Tom Curren becoming not only the first player this year to rack up 50 touches, with 54 for the fame, but also to reach 200 ranking points, in a very dominant performance.

Langwarrin stand alone now at the top of the Division 2 ladder after their dismantling of Hastings. The Blues were just 20 points down before they were held to just two more for the match, However, the Roo’s found no issue scoring as they piled on 11 goals in the same period to walk out 84 point victors. Andrewartha was quiet for his standards but went at 96% efficiency, while Jake Dormer  and Mitch Mathie kicked 4 goals each. Young star Clayton Gay was named as the best for Hastings with 24 touches and two goals.